Our team of professional is well equipped and adequately trained to carry out fumigation, whether it is residential house, office or factory. We are cable enough to eradicate insects, mites, bed bugs, mosquito, lizards, cockroaches, flies and the like organism and rodent control.

Fumigation is a method of pest control that completely fills an area with gaseous pesticides –or fumigant – to suffocate or poison the pest within premises.

Fumigation usually involves the following phases: 1st the area to be fumigated is usually covered to create a sealed environment: next the fumigant is released into the space to be fumigated: then: space is held for set period while the fumigant gas percolates through the space and acts on kills any infestation in then product, next the space is ventilated so that the poisons gas are allowed to escape from the space and render it safe for humans to enter.

Fumigation is a hazarding operation and generally it is a legal requirement that the operator carrying out the fumigation operation holds official certificate to perform the fumigation
The correct ventilation of the area is a critical safety aspect of fumigation, it is important to distinguish between the pack or source of the fumigant gas and the environment which has been fumigated. While the fumigant may be safe and spent, the space will still hold the fumigant gas until it has been ventilated 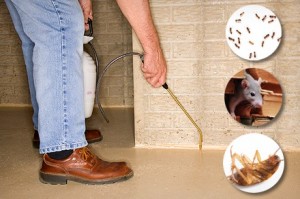 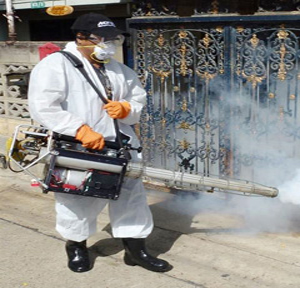